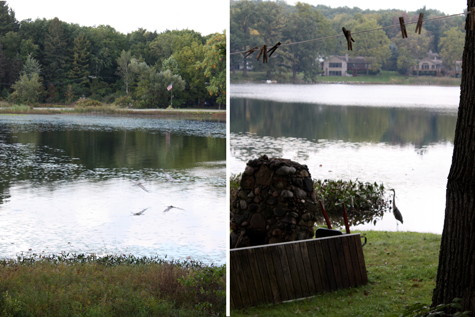 These are a couple of my sad attempts to capture the Sandhill cranes that have been hanging around these days. I'm fascinated by their prehistoric cries, red throats and gangly strut.

But what I'm really here to tell you is that I've flown the coop. I'm headed south to surprise my mom for her birthday and, with some of the rest of the family, whisk her off for several fun-filled days in Charleston, SC. I'll be back the week of October 24 filled, I'm quite certain, with tales of eating and adventure!
No comments:

Email ThisBlogThis!Share to TwitterShare to FacebookShare to Pinterest
tags: travel 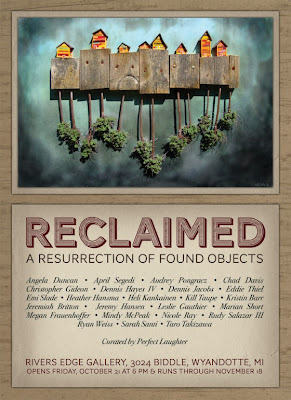 Curated by Dennis and Christina Jacobs of Perfect Laughter, Reclaimed: A Resurrection of Found Objects is a group show opening at River's Edge Gallery in Wyandotte next Friday, October 21 at 6 p.m. The couple—known for both their outstanding printmaking work and their popular arts blog—have gathered a formidable collection of artists to contribute to the show and I couldn't be more honored to be included in the mix. The opening corresponds with Wyandotte's Third Friday so there will be plenty else to do and see in the area, so please come and show your support for the local art scene! 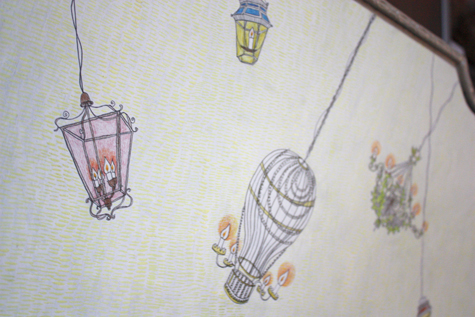 Above is a little sneak peak at my piece for the show. It has panoramic dimensions making it quite difficult to photograph, so please bear with these less-than-stellar shots. And now a little back story… 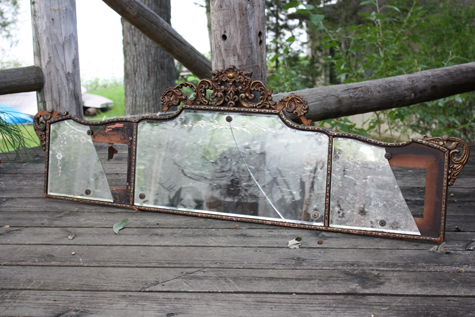 As you may already know, we moved into a new house in July. I wanted to do something related to this for the show and handily found this broken down mirror tucked away in a back corner of the basement under a pile of old shutters.

I removed the glass and in doing so managed to mangle what remained of the decorative embellishments on top — and so decided to remove them all. 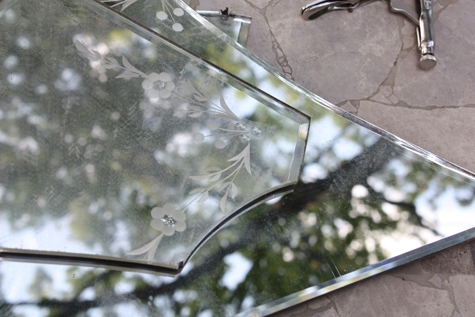 I used the broken mirror bits as a stencil to trace out the necessary shapes and then cut them out from scraps of sketch paper that had been used in one block printing endeavor or another. 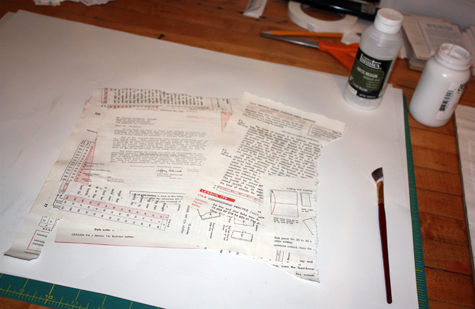 I wanted to build up the surface to a workable thickness on which I could draw. I used bits of pages from a typing manual I picked up at a thrift store recently — I bought it for the cover and then have done nothing with it since! My first layer was bubbly and uneven, so I continued to add layers trying to make it smooth. In the end I added a final layer of newsprint that worked out better than the rest. I then added several layers of gesso and—at last—began to draw… 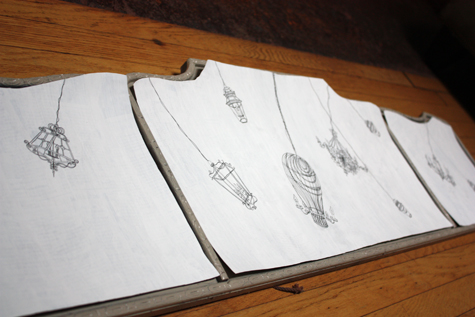 I knew I wanted the piece to be related to our new house in some way. As I showed you in this "Chandelier Madness" post, the place is filled with multiple chandeliers in every room — including the bathrooms — so it seemed appropriate to focus on those. They give our home such character — plus they're super fun to draw. 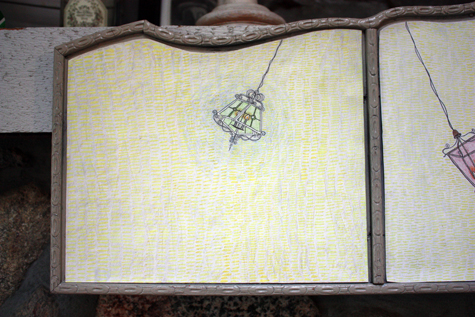 You'll have to come down to the show to really see, as these photos are terrible. Plus you'll get to see a show chock full of amazing artists. It runs through November 18.
2 comments: 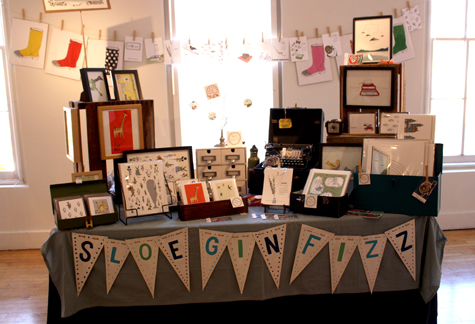 When I said a couple of photos from Liberty Local, I meant just that: two. Yikes! I thought I had taken more, but must have gotten distracted by all the goodies around me. Above is a look at my display and then, below, just one of the many amazing origami designs by my table neighbor, Beth Johnson. 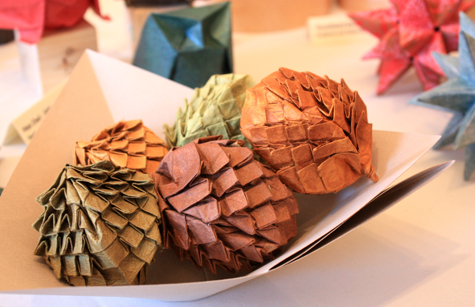 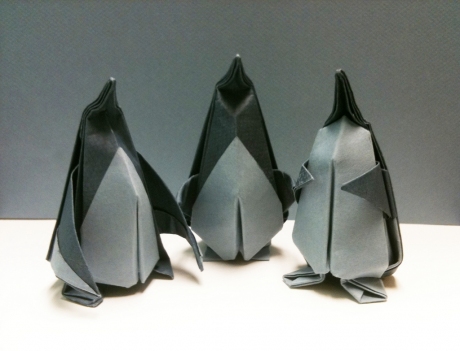 These penguins are from her web site and I strongly encourage you to go visit for more. Beth also has diagrams to learn from and all kinds of useful info. She was super fun to be next to and I enjoyed listening to her talk about her work so passionately. 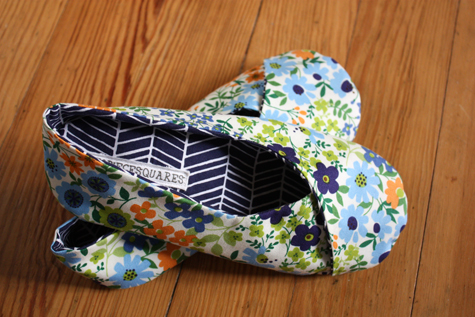 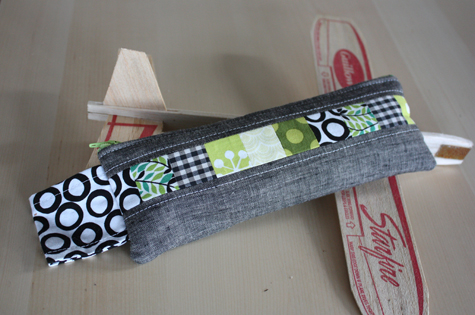 I made several purchases at the show—I couldn't help myself! I've admired Sarah Place-Minshall's sewn goods for some time now. (She makes them under the name Hip to Piece Squares. Cute, right?!)  I hadn't bought anything before because I literally want it all and can never decide. She has such spot on taste in color and fabric design. I've especially wanted a pair of her kimono house shoes and finally got some—and the super cute pencil case— both seen above. I was also extremely tempted by this, this and this. Someone go buy them before I do—please! 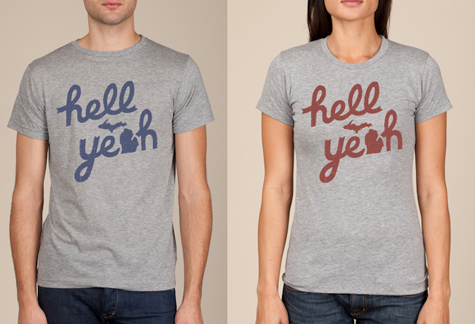 I also picked up one of these awesome "Hell Yeah" tees for the boy. I seriously wanted one for myself, too and am regretting not snagging two. They are made by Alisa Bobzien who has a great sense of humor and style. I was also tempted by her sweet Michigan constellation tee: 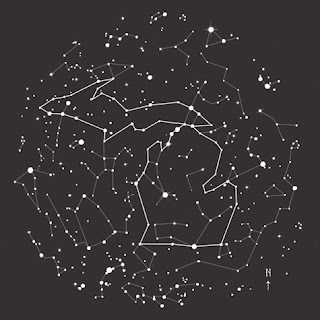 What did you get up to last weekend? It was great to see those of you who could stop by the show and I look forward to seeing the rest of you somewhere's soon!
2 comments: 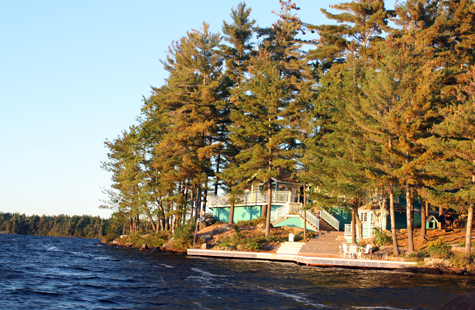 Last weekend the boy and I were headed up to Toronto to visit some friends for several days. I was looking forward to glorious urban wandering, leisurely sipping coffee here and there, maybe taking in some art. But mostly wandering. At the last minute, we got the call that we were being whisked off for a lake retreat instead — and let me tell you, while I was sad to miss the urban wanderings, the weekend, setting and company was perfection! Apologies for not filling you in sooner, but it's been crazy hectic around here these days. I'll have plenty of updates soon, but thought I would start with a few water views and sunsets. 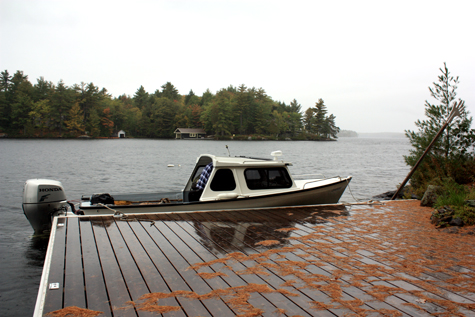 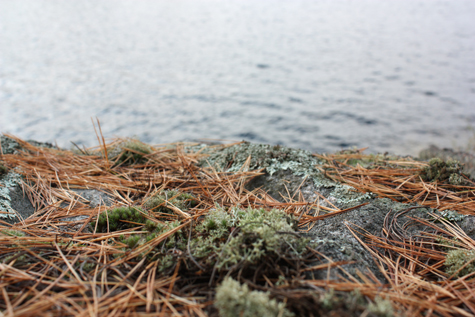 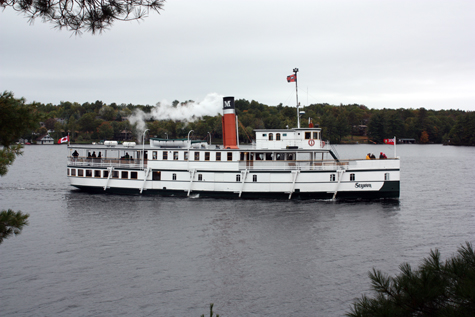 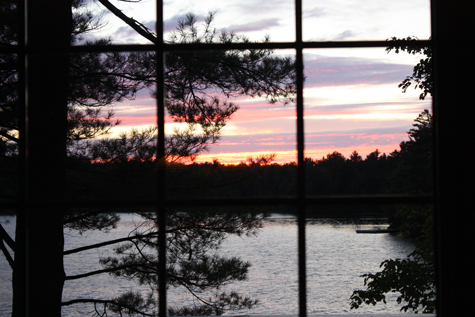 I spent this most recent weekend as a vendor at Liberty Local at the Ann Arbor Art Center and had a wonderful time. I'll have a few photos, highlights and new finds for you tomorrow. Until then…
1 comment: