This is one of those recipes that is deceptively long, but you shouldn't be intimidated. It's really  straightforward: make a dry rub - make a little sauce - roast some veggies - cook the pork. That's it. It makes a mountain of food that tastes just as good at room temperature, and certainly the next day. In other words, the perfect summer recipe. Make it on Saturday and feed a crowd, or nibble on it in various ways for days and days.

The roasted vegetable combination is amazing and would taste great in a burrito or just all mixed together as a salad, maybe with a grain thrown in for a complete meal. I skipped the broccoli rabe just because and you could throw in any other veggies you happen to have. And I'm not sure why the shallots are unpeeled, but I did this and they look so pretty, I would do it again. Make extra because you'll find yourself reaching into the fridge for them just on their own. AND… you can make a mean Cuban sandwich with the leftover pork!!

Roast Pork with Summer Vegetables
via Saveur
Serves 6 to 8.

1. Prepare the pork: Put coriander, fennel, and cumin in an 8" skillet over medium heat and cook, swirling pan occasionally, until seeds are toasted, about 5 minutes. Coarsely grind seeds in a spice grinder and transfer to a small bowl. Add paprika, sugar, and garlic and stir to combine. Put pork on a plate and season generously with salt. Rub pork with coriander mixture and cover with plastic wrap. Let sit at room temperature for at least 1 hour or refrigerate overnight. 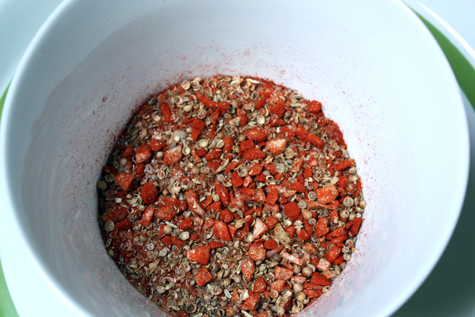 2. Make the herb sauce: Put coriander, cumin, and cardamom in an 8" skillet over medium heat and cook, swirling pan occasionally, until seeds are toasted, about 5 minutes. Finely grind seeds in a spice grinder and transfer to a medium bowl along with cilantro, garlic, and jalapeños. Using a fork, whisk in olive oil and season sauce with salt; cover with plastic wrap and set aside. 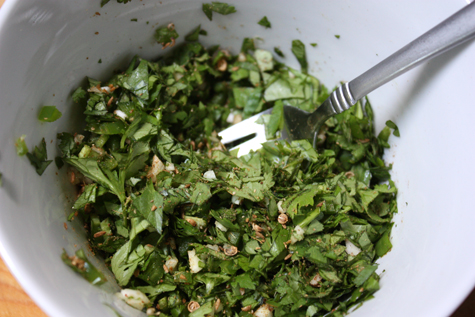 3. Roast the vegetables: Heat oven to 475°. Put sweet potatoes on a baking sheet and bake, turning once, until tender, 40–50 minutes. Transfer to a plate; set aside. Increase heat to broil and arrange a rack 4" from heating element. Put tomatillos and poblanos on baking sheet and drizzle with 2 tbsp. olive oil. Broil, turning once, until charred and tender, about 10 minutes. Transfer tomatillos to plate with sweet potatoes and transfer poblanos to a bowl. Cover bowl with plastic wrap and set aside for 15 minutes. Peel poblanos, discarding seeds and stems, and tear poblanos into 1⁄2"-wide strips; set aside. 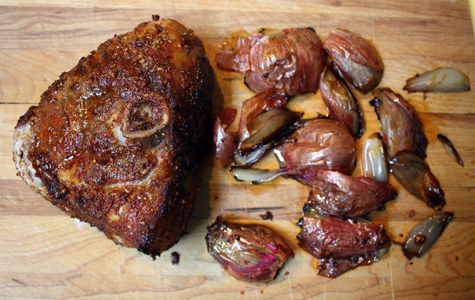 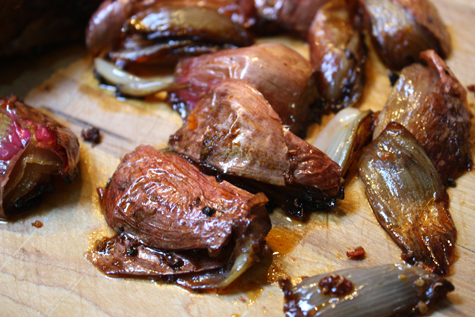 5. Cook the pork: Reduce oven to 350°. Heat canola oil in a 12" cast-iron skillet over medium-high heat. Add pork and cook, turning, until browned on all sides, about 4 minutes. Place shallots cut side down under pork. Transfer skillet to oven and cook until an instant-read thermometer inserted into thickest part of pork reads 125°, 30–50 minutes. Transfer pork and shallots to a cutting board and let rest for 15 minutes. To serve, slice pork thinly and transfer to a platter along with shallots. 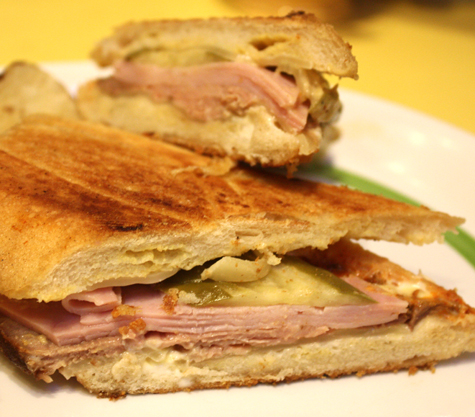