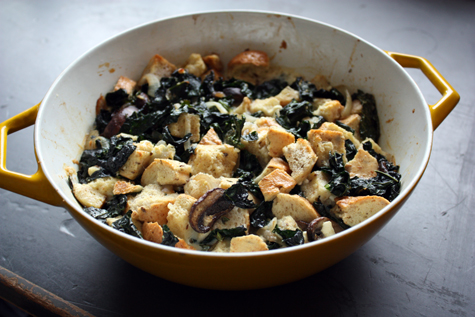 I've been making a lot of savory bread puddings lately. They're a great easy way to use up stale bread and whatever veggies you have on hand. You can pretty much add just about anything you'd like. This recipe sparked it all, and I then came across a healthier version from Heidi Swanson of 101 Cookbooks in Food and Wine this month. Her combination of lemon, feta and dijon is pitch perfect. I could easily snarf down the whole pan of it.
Spinach Bread Pudding with Lemon and Feta


Preheat the oven to 350°F. Lightly oil a medium baking dish. Spread the bread cubes on a baking sheet and bake for about 10 minutes, until dry but not browned. Let cool, then transfer to a large bowl. Stir in the spinach and 1/4 cup of the feta.
In another bowl, whisk 2 tablespoons of the olive oil with the mustard, lemon zest and lemon juice. Add the eggs and beat until blended. Add the milk and season with 1 teaspoon of salt and 1/2 teaspoon of pepper. Pour the egg mixture over the bread cubes and stir until they are evenly moistened. Transfer the bread mixture to the baking dish and let stand at room temperature for 2 hours or refrigerate overnight.
Sprinkle the remaining feta on the bread pudding and bake in the center of the oven until risen and set, about 40 minutes. Turn on the broiler. Drizzle with the remaining 1 tablespoon of oil and broil until the bread pudding is golden and crispy on top, about 2 minutes. Scatter the oregano on top, cut into squares and serve. 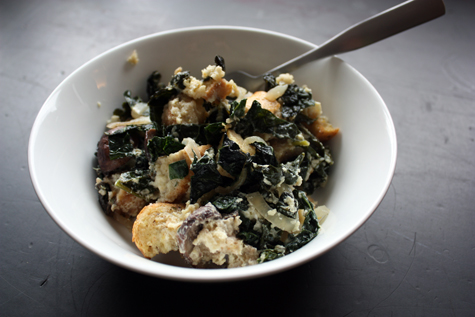 Okay, so here's the disclaimer: I made a lot of changes to this recipe. Not because it needed changing — it doesn't! I used kale instead of spinach and since it takes a bit longer to cook, I sauteed it with a bit of shallot and the couple of  cremini mushrooms I had hanging out in the veggie bin. I also made about half this recipe, but only had two eggs and didn't wan to wait two hours for it to all soak in together. So after assembling the whole lot, I poured a bit of broth over the other thing to top up the liquid. Crazy, right? It worked! And, I didn't let it sit for two hours, I just put it right in the oven. I also skipped the toasting of the bread because it was already several days old and dry as can be! You could do a whole lot with this basic concept — I've added sweet potatoes to the mix before, or leeks — all delicious!
Have a happy, cozy weekend!
4 comments:

The door is open… link love 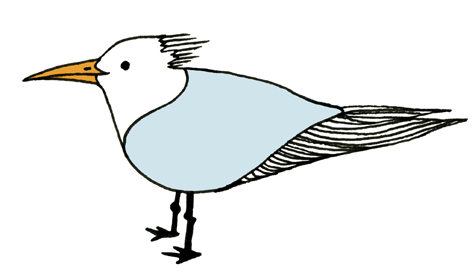 I — like many of you, I imagine — spend a large portion of each day online. I'm constantly consuming new images and info and links and stories and recipes and tweets and advice. There are some days when I skim through it all and nothing really catches or sparks or holds. It has more to do with my mood than the actual content I'm finding. And then there are days like today, when everything seems remarkable and inspiring and fresh and new. So, while the feeling is still fresh,  I thought I would share some things that caught my eye this week… I hope you enjoy them as much as I have!
Society of Killustrators: Illustrators contribute to posted assignments

The portfolio of illustrator Olaf Hajek

Books that rocked your world at 16 but fall flat today


And this same feeling is extending beyond the online realm with the book I just started this morning. I'm not one to call a book "laugh-out-loud" funny. I mean, who says that with a straight face? Well, I am actually laughing out loud, so I don't really have a straight face, so what the heck, I'll say it: This book is laugh-out-loud funny. I mean it. I found the book — The Bucolic Plague: How Two Manhattanites Became Gentlemen Farmers — on a recommended "eco-winter reads" list posted on Design*Sponge by Ashley English of Small Measures. I immediately requested as many as I could from our library (hello, interwebs!) and was most excited to read The Dirty Life by Kristin Kimball. But I'm not the only one and the book has a long list of hold requests on it before mine. In the meantime, The Bucolic Plague came in and I started it in the wee hours of the morning. I kept chuckling in bed like a fool. I had to force myself to put it down and get to work. At which point I started to catch up with my Google Reader… and so goes the cycle!
I'll be back tomorrow with a tasty recipe to start off your weekend right!
No comments: 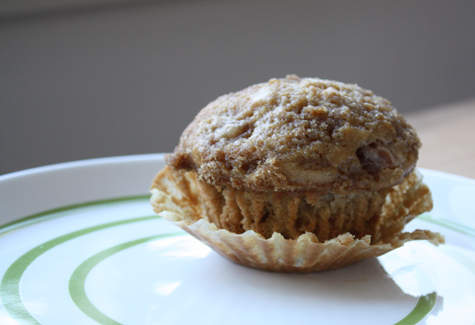 These lovelies were made especial for the boy. He loooves pears and also loooves these other mufins, so I thought I'd try these on for size and see if there would be loooove. Definitely something close to it. The ground ginger I have packs a wollop, so I would declare these spicy, but it all depends on the spice level of your ginger. I found this recipe on Canadianliving.com and the best part of that site is that the recipes include a serving calculator. So, for example, you could find out what you need to make just a pair of these pear muffins. Or one for that matter! The site also had a Pear Ginger Muffin recipe that I may have to try — just cuz.
Ginger Pear Muffins
From Canadian Living, October 2005
Makes 12

In separate bowl, whisk brown sugar with oil; whisk in egg and buttermilk. Pour over dry ingredients; sprinkle with pears and stir just until dry ingredients are moistened. Spoon into greased or paper-lined muffin cups.

In a small bowl, combine brown sugar, butter and ginger; sprinkle over batter. Bake in centre of 350°F (180°C) oven until tops are firm to the touch, about 25 minutes.
Note: If you don't have buttermilk, you can pour about one tablespoon of white vinegar into a measuring cup and add milk to make one cup. Let stand for five minutes and it will curdle slightly. Use this in place of the buttermilk. 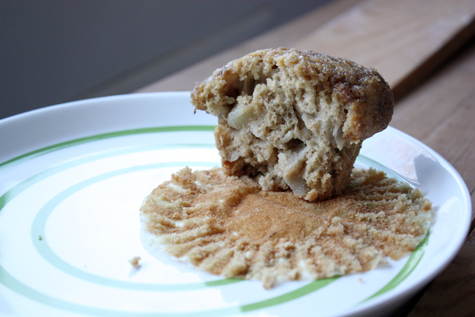 Get Your Paint On 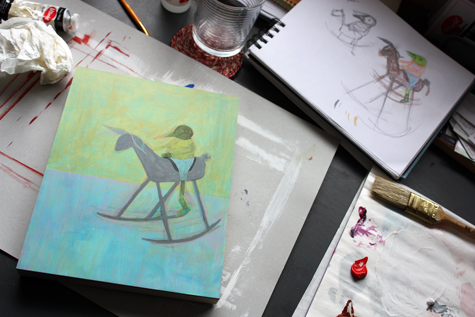 Here's a look at my desk these days. I signed on to take a fantastic online painting course called Get Your Paint On with two artists I greatly admire: Mati McDonough and Lisa Congdon. It's a five-week course and we're already into week four — I don't want it to be over so quickly. 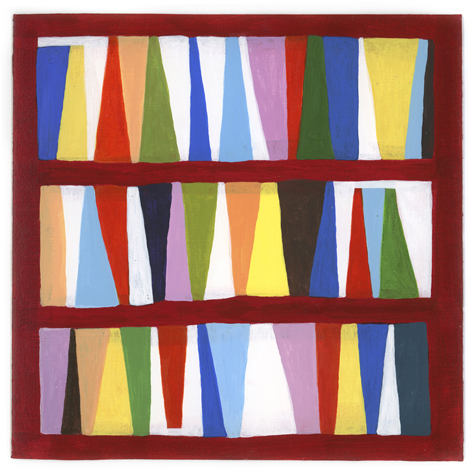 Acrylic on Illustration Board
If you're familiar with my artwork and shop, you may have noticed that it is dominated by hand drawings that are colored digitally. I've been itching to get my hand back into more of the process painting and/or printmaking.  My prior experience with painting had kind of dead-ended. I had found a technique whose outcome I really liked, but only now am I realizing that I didn't like the actual painting process. I think that's why I slowly moved away from that to the digital. But this class has definitely jump-started my engines and I am really enjoying the process. 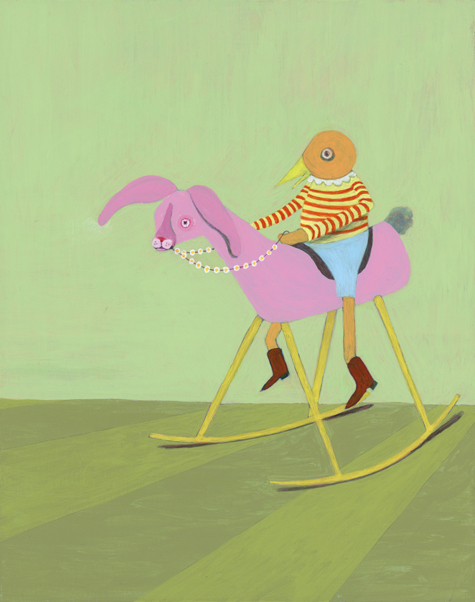 Acrylic on Gesso Board
I'm working with acrylics and am quite a slow painter and decision-maker so I am about a week behind in the assignments, but I'm okay with that. I'm just enjoying the exploration process and am so glad I signed on. It is an incredibly supportive atmosphere and I would encourage anyone who has even the slightest interest in painting, or who just needs a creative jolt, to sign on to the next round — it will jiggle your inspiration in just the right ways!
4 comments: