In the kitchen: Raspberry Buttermilk Cake 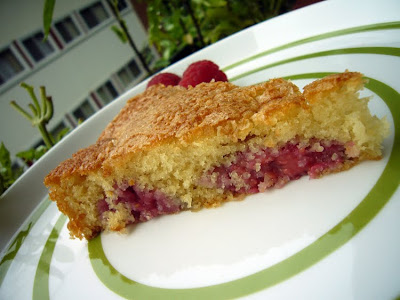 With the raspberry harvest winding down, I'm trying to get my fill. Despite being an easy cake, this one was groundbreaking in our kitchen. The boy came with a Kitchen Aid. Can you believe my luck? But for almost a year I have been toiling away with the good old-fashioned hand method. Call it intimidation, but I couldn't breing myself to use it. Not so anymore. I finally broke down, wiped off the dust and mixed away. The result: this tasty cake June's Gourmet that I highly recommend:

Preheat oven to 400°F with rack in middle. Butter and flour a 9-inch round cake pan.

Beat butter and 2/3 cup sugar with an electric mixer at medium-high speed until pale and fluffy, about 2 minutes, then beat in vanilla. Add egg and beat well.

At low speed, mix in flour mixture in 3 batches, alternating with buttermilk, beginning and ending with flour, and mixing until just combined.

Bake until cake is golden and a wooden pick inserted into center comes out clean, 25 to 30 minutes. Cool in pan 10 minutes, then turn out onto a rack and cool to warm, 10 to 15 minutes more. Invert onto a plate.

The tardy bird catches the corn

Last weekend I wanted to get to the farmer's market for some corn, but got so wrapped up in things during the day that I had to rush to make it before they closed at 3pm. Before I even got there, I was feeling disappointed at what would be available so late in the day — everyone knows that true market shoppers get there at the crack of dawn for the best choices. Not so! There are good choices to be found late in the day. As I raced up to my favorite corn farmer, he announced that he was having an end of the day special: $5 for a full shopping bag of corn. Sold! I walked away with about 20 ears of corn. So instead of corn on the cob, we feasted on poblano corn pudding. I had never made it before, but had an idea of what I wanted and knew it had to have cheese. After an extensive search, this is what I found: 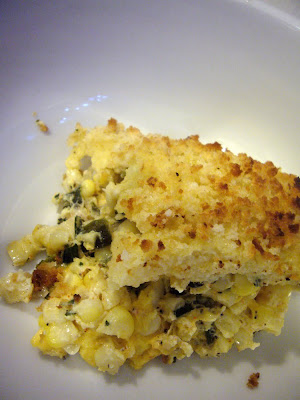 Roast the poblano peppers under the broiler, turning often with tongs until all of the skin is blistered, about 10-15 minutes. Put the peppers in a bowl and cover with plastic wrap to steam for about 10-15 more minutes. When the peppers are cool enough to handle, transfer to a cutting board, peel the skin off, remove the seeds and stems, dice, and set aside.

Heat 1 tablespoon of the butter in a medium saute pan over medium heat, add the onions and the salt and pepper. Cook until the onions are translucent, about 5 minutes, and then set aside to cool.

Heat the milk in a small saucepan over medium heat just until it starts to simmer, about 3-5 minutes.

In a large bowl, whisk the eggs and then slowly add the scalded milk. Whisk in the sour cream and then fold in the cheese, corn, peppers, onions, herbs, cayenne. Season with salt and pepper, to taste.

Add the mixture to a 9 by 13-inch buttered baking dish and set aside.

Put the remaining 2 tablespoons of butter in a medium saute pan over medium heat and add the panko. Toss to coat the bread crumbs and season with salt and pepper. Pour the bread crumbs over the pudding and bake in the preheated oven until the bread crumbs are golden, the pudding is set and bubbling around the edges and a toothpick inserted into the center comes out clean, about 25 minutes. Place under the broiler for 2 minutes to brown up the bread crumbs. Remove from the oven and serve.

It makes a lot so be sure to invite some friends!

Hi all! As promised, I have not been posting as often this month while I focused on some new drawings and designs. I thought I would share three new prints I posted to the shop this past week. 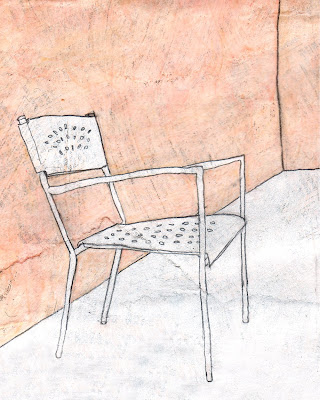 The Found Chair
This drawing is actually a detail from a larger piece that I started years ago. I had rented a studio space in Williamsburg, Brooklyn for about six months or so and the larger drawing was about the only thing to come out of it. That said, I absolutely love the drawing even now, years later, and have continued to work on it here and there. This is one of my favorite parts of it, so I thought I would pull it out and play with it some more. 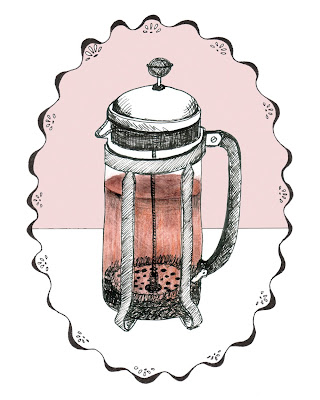 My dearest friend
I've also been working on some drawings of my favorite things around the house. Without my coffee, mornings would be quite scary for everyone involved. 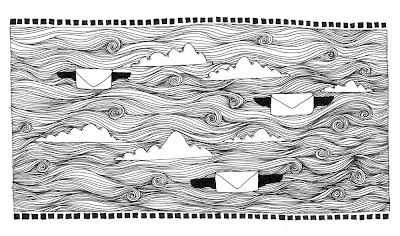 The air between us
And, last but not least, a drawing from my sketchbook that just seemed to happen.

I'm having a lot of fun trying some new things and playing around. I also have some new paper goods planned for the next week or two, so keep an eye out. Hope you're having a great summer and making the most of the sunshine. Cheers!