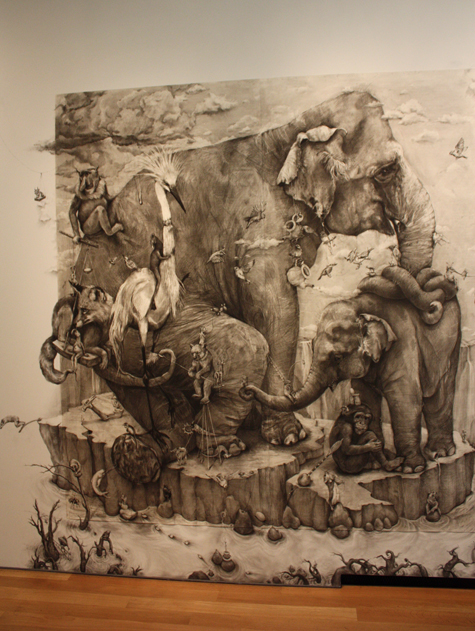 The weekend before Christmas the boy and I took a quick overnight trip to Grand Rapids with his dad and stepmom. I was itching to see the Real/Surreal exhibit at the Grand Rapids Art Museum before its closing on January 13, 2013. That show was dark, brooding with just a couple of stand out pieces (to my mind), but the entire trip was worth it if only to see Elephants by Adonna Khare.

This enormous pencil drawing was the grand prize winner of the 2012 ArtPrize and it just took my breath away. The scale and detail of it is incredible. I could have stayed and examined it for days. It is three paper panels which Khare embellished in the installation with little details bridging and surrounding them: a giraffe scales the air vent next to the installation; a billy goat walks a wire between two of the panels; the water scene extends to the floor. 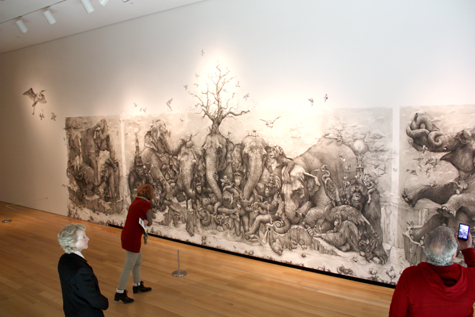 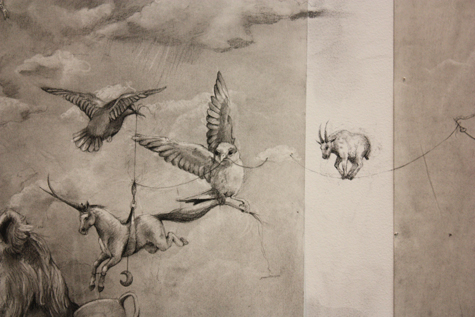 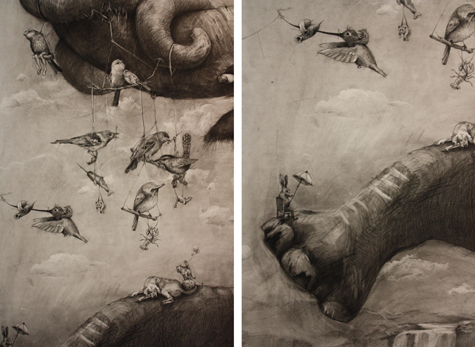 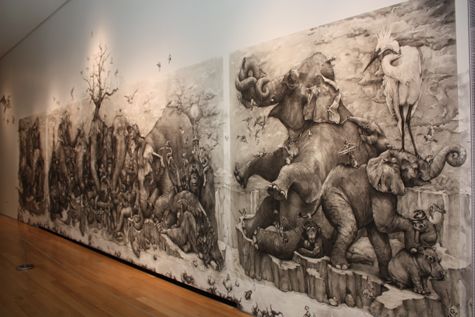 If you ever have the opportunity to see this, take it. You will be astounded. It makes me want to draw. REALLY draw: big and sumptuous and detailed and thriving. 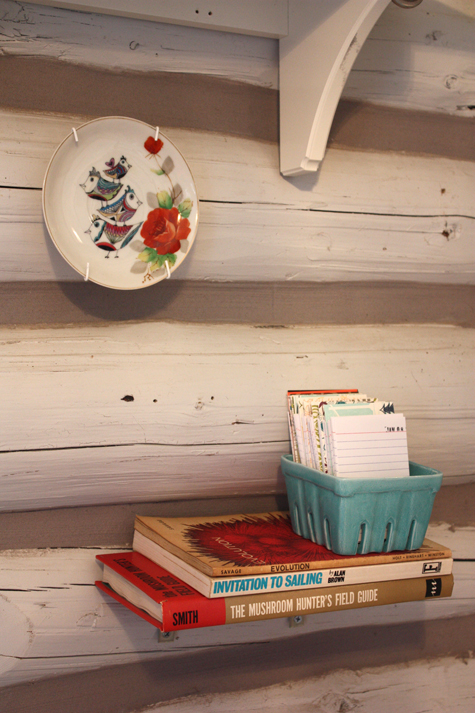 Tada! That's how I felt when I finished this sweet little book-as-bookshelf DIY project, so I thought what better way to start the the 2013 Book Business column? While I missed the boat on the concept of the shelf's hidden brackets until I had finished the whole thing (the brackets should point up so that a couple of books stacked on top cover them rather than being visible below), I still consider it a great first go-round and can't wait to tackle a few more for around the house. (The adorable plate hanging above the shelf is from the talented Janae Easton of Platypusfile.) 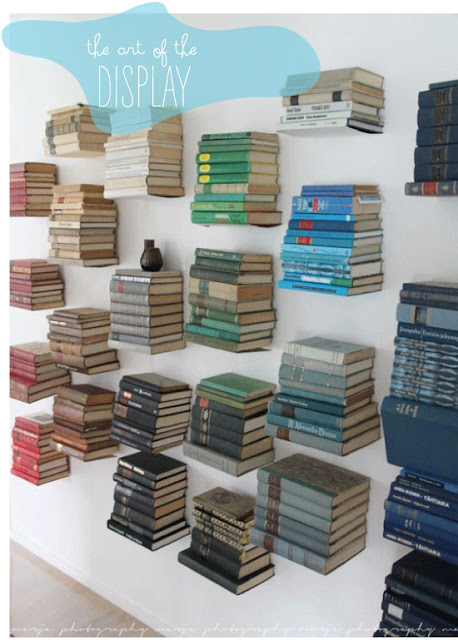 It started when I saw this photo on Poppytalk. Drool … slurp … gawk. The Poppytalk post linked to instructions by Meighan O'Toole on Wired, which are the ones I used. However, I would recommend having a look at this version on Instructables, too. I think one of the most important notes was to put in the screws inside the back cover by hand, rather than a power drill because it is very difficult to keep the pages from twisting with the drill.

All-in-all, an easy fun project that I managed to use as an excuse to pick up a few silly books from the thrift store. Doesn't my terrarium from The Foraging Florist fit perfectly? Let me know if you try this yourself. And stay tuned for another little DIY next week (there's a sneak peek of it in the top image. Can you guess?)

Happy New Year! It was so nice to take a little internet break and soak up the snowy days nestled on the couch with a few great books and not a few roaring fires. I feel rested and ready to dive into the new year head first. How about you?

I've been cooking up a storm, too as I tend to do this time of year. I know many of you enjoy that most about my blog and my recipe posts were few and far between toward the second half of last year. Thanks so much for following along regardless. My plan is to post at least one recipe per week in 2013.  I added a recipe index at the beginning of last year and I hope to refine it this year to make it a bit easier to navigate. I've also been itching to update the look of the blog, so stay tuned for that. 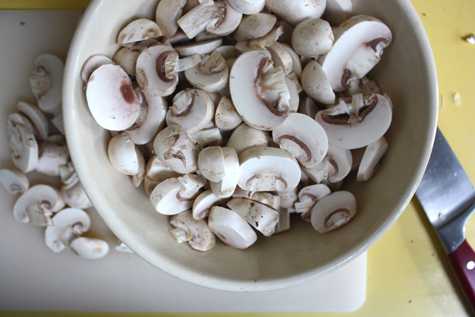 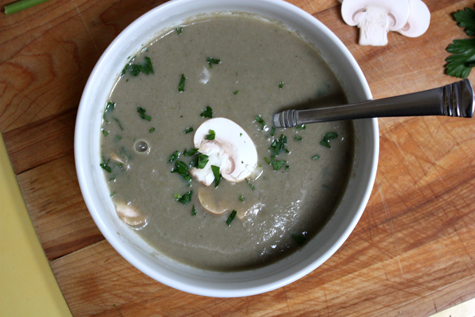 In the meantime, I thought it would be appropriate to start the year off with a soup recipe: It's comforting and healthy all rolled up in one. This soup is velvety smooth with a rich yet clean flavor. It comes from Dorie Greenspan's Around My French Table and includes a little "salad" of thinly sliced mushrooms, scallions, parsley and chives that you pour the soup over just before serving. You could skip this part but it really does make the soup all the much better. Don't forget to season it! And again, you could use black pepper over the white, but the white pepper is just that much better with a more subtle flavor. 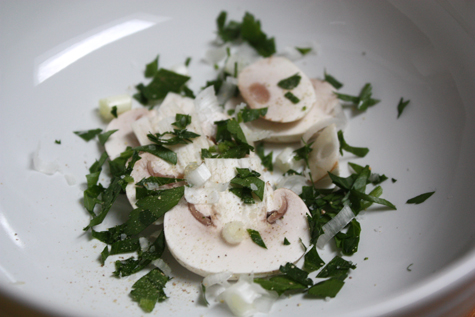 via Dorie Greenspan's Around My French Table

Melt 1 tablespoon of the butter in a large Dutch oven or soup pot over low heat. Add the onions and garlic and season with salt and white pepper to taste. Cook, stirring often, for about 5 minutes, until the vegetables are soft. Add the mushrooms and the remaining tablespoon of butter, raise the heat to medium and cook, stirring often, until the mushrooms start to release their liquid, about 3 minutes. Increase the heat to high and cook until almost all the liquid evaporates, about 15 to 20 minutes. Pour in the wine and let it boil until it, too, almost evaporates.

Toss the herbs into the pot and add the broth or water. Bring to a boil. Lower the heat, cover the pot almost completely and cook at a gentle simmer for 20 minutes.

If you can, pull out the rosemary sprig and discard.Working in small batches in a blender or food processor, puree the soup until it is very smooth. Taste and season with salt and white pepper as necessary. Pour the soup back into the pot and heat it gently over low heat until hot.

Divide the mushrooms, scallions (if using), parsley and chives among six soup plates. Season lightly with salt and white pepper. Ladle the soup into the bowls and top each with a dollop of creme fraiche or sour cream, if desired.